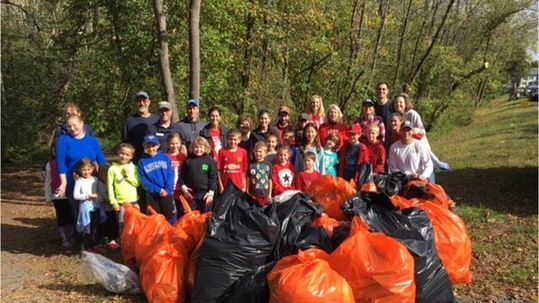 EAST BRUNSWICK, NJ — Rick Perrine, the township’s Coordinator of Instructional Programs & Special Events, was pleased to see so many dirty, but happy, people on Sunday afternoon during the inaugural “family-level” mud run conducted at the East Brunswick Community Arts Center.

“The family mud run seems to have gone off well,” Perrine said.

In conjunction with Your First Mud Run, a New Jersey-based nonprofit that said the day represented the first time it operated an event for a recreation department rather than a school, the township raised funds for the Community Food Pantry.

NJ kids obstacle raceMore than half the 375 participants were kids; they enjoyed 10 mud covered obstacle-stations over a nearly three-quarter mile field course on the grounds of the arts center, which each wave of participants ran or walked twice. (Some five waves, every half hour, starting at 11 a.m. consisted of no more than 80 people in each group.)

While a portion of every registrants fee was donated to the community food pantry, explained Perrine, if someone opted to select a team, a second donation was also made to that charity. But if you didn’t have a team-charity, the department recommended choosing the food pantry so that it would receive a double donation.

“People set up charity teams in memory of loved ones, the American Cancer Society, or Team Daisy (The Daisy Association is the major support group for special needs programs offered by the Department of Recreation),” for instance, said Perrine.

Brad Vaccaro, the owner of Your First Mud Run, said the number of events the outfit conducts has grown from just a single mud run back in 2011 to 13, including the one on Sunday, and forecasts doing as many as 18 next year.

“We always partner with some sort of charity if we can,” he said.

“Here, the food pantry gets a portion of the money we take in,” he said, adding that the rest pays for medals, prizes, and T-shirts, in addition to other expenses.

The nonprofit has also worked with South Plainfield High School and Lehigh University, he said.

While waiting for the next cluster of people to reach the pushups and burpees station where everyone was supposed to do 10 burpees and 10 pushups, he said he volunteered through East Brunswick Public Schools, and the East Brunswick Youth Council.

“Me and a bunch of [classmates] signed up to volunteer,” Mir said. “It is six hours for us, and our school records it for us.”

Reminding people on social media that pre-registration would be ending, the township said: “The weather looks great for [Sunday]. We only have 15 spots left then the online registrations will be shut down. [But] you can still walk up day of the event for $60 cash only. Don’t miss the Zombie chase and pumpkin carry obstacle! … A ton of fun for everyone.”

While it was “geared to having a good time in the muck,” prizes were presented for best costume and muddiest runner, among others.