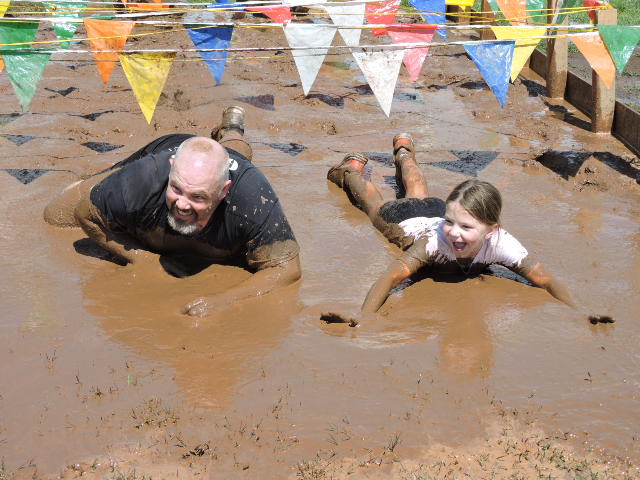 SOUTH PLAINFIELD, NJ – This past Sunday the Riley School PTSO held South Plainfield’s first official family mud run. Nearly 300 participants took part in the event which included an obstacle course, various calisthenics and a lot of mud. “We were looking to do something different and fun,” said Carly Hamlett This is the only family mud run in the area that children can participate in, and when I called Brad Vaccaro of yourfirstmudrun.com and found out they help do fundraisers I said the Riley School PTSO has to do this.”

Although the event was to raise proceeds for Riley School in South Plainfield, running through mud seemed to have statewide appeal. Participants came from as far south as Lacey Township and as far north as Washington Township in northern Bergen County.“This is my first mud run,” said young TJ Cook of Washington Township. “I really hope to get muddy.”

Cooks’ wishes were granted. He as well as anyone that participated in the event could not avoid getting dirty in the mud pit.

South Plainfield High School student Michael DeAngelis was the first person to finish the kid’s mud run. “This was my first mud run,” said DeAngelis. “I had a great time doing this. It was a little cold, but I just kept pushing through it.” The event, which had the ambiance of a healthy carnival, started at 10:00 am and had a total of three different participating time slots. The course began directly behind South Plainfield and went along the brook up to Cedarbrook Avenue over to Grant School. In total, the route was two miles of obstacle-laden fun.

“One of the unique things we offer at Your First Mud Run,” says Brad Vaccaro, the event organization, “is that we have one of the only events where vendors could sponsor the event, create a team AND raise money for their favorite charity.”

According to Vaccaro one of his goals in life is to do big events for charities, and this event had all the makings of fitting that bill. All of the participants seemed to be very pleased, and for a first-time event, the crowds seemed to just keep coming.