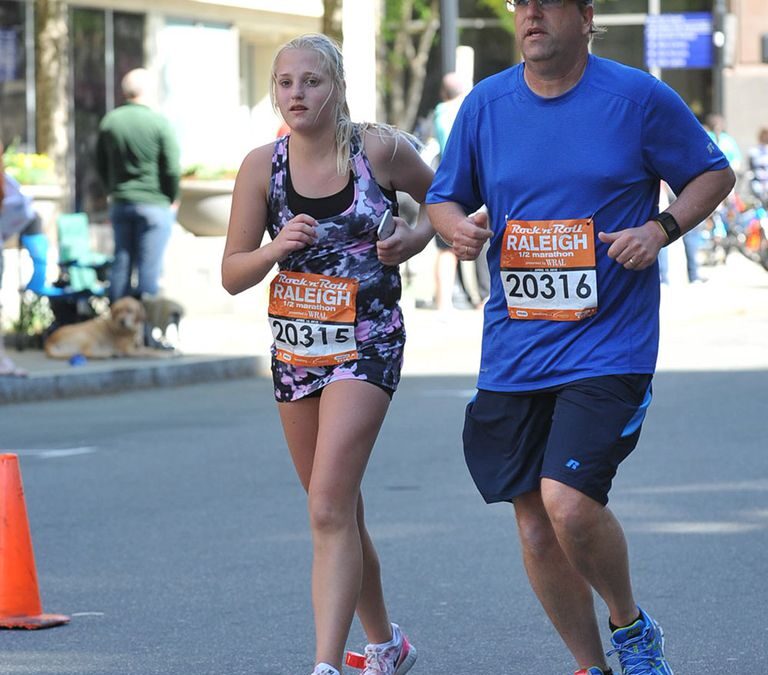 “I thought it was pretty cool that people could accomplish those things,” said Alexi, 15, who lives in Holly Springs, North Carolina. “I wanted to be one of those people and do something I never thought I really could.”

John, 50, an off-and-on-again runner who returned to the sport three years ago and has run a few half marathons since advised his daughter to start training before she officially registered for the race that was just eight weeks later.

“I didn’t want to set any expectations that couldn’t be met,” John said. “It was like anything else with running, you could run one day and go out too hard and never want to run again. If you do the training and feel confident that you can complete it, we’ll sign up.”

When Alexi Dooley was born, she fit into her father’s palm. Born prematurely at 28 weeks with her twin sister, Sydney, Alexi only weighed 1 pound, 15 ounces.

During those first few weeks of Alexi’s life spent in the neonatal intensive care unit, her father, John, likely did not imagine that 14 years later he would run half marathons and family mud runs alongside his daughter. And that she would quickly be able to outrun him.

From an early age, Alexi threw herself into competitive cheerleading, a year-round sport that required hours of practice. In January, however, she realized she wasn’t enjoying it anymore and quit. A month later, she saw a commercial for the Rock ’n’ Roll Raleigh Half Marathon and told her dad she wanted to sign up.

To calm his daughter’s nerves, John reminded Alexi about her training and that the hard work was already behind her.

“I had nothing but confidence that she would complete it,” John said. “I was really excited because it was the first milestone in her running career.”

“It was the most amazing feeling ever,” Alexi said. “When I got the medal, I felt like I earned it.”

Alexi kept running through the summer and joined Apex Friendship High School’s cross-country team that fall. She even convinced her sister and friend to sign up, too. Then in early September, she ran her second 13.1-miler, the Rock ’n’ Roll Virginia Beach Half Marathon.

The pair began training together using Jeff Galloway’s run-walk-run method and slowly built up Alexi’s endurance. John said he showed Alexi how to pace herself, emphasizing the distance completed was more important than speed.

“When I first started, it was a struggle to run for 30 seconds, but I felt really good after each workout because I saw that I was improving,” Alexi said. “I didn’t think I was going to love it this much.”

For John, the time spent one-on-one with his daughter proved invaluable.

“As a dad, the whole underlying thing for me in doing all this training was that I got all these extra hours in with her, which was totally cool,” John said. “Not many dads get a chance to do that.”

So on April 12, John and Alexi found themselves on the starting line of the Rock ’n’ Roll Half Marathon in Raleigh.

“I was excited the night before, but when I woke up, the nerves started to get to me,” Alexi said. “I had never done more than 10 miles, but my dad guided me through.

“In running, you have to depend on yourself,” she added, “but in cheerleading, you have to rely on other people. The race was focused on me and what I could do. I liked that part of it.”

During the car ride home, Alexi asked if she could sign up for a third half marathon, the Rock ’n’ Roll Half Marathon in Savannah, Georgia, which was one month later.

“I knew that if I didn’t keep pushing myself, I would’ve regretted it in the long run,” Alexi said. “I was really happy and surprised. I had a goal set in mind, but I didn’t think I would achieve it.”

Even though she’s already outpaced him, Alexi said she’s grateful for all that her father has taught her on the roads.

This time around, Alexi dropped her dad after the first seven miles.

“She looked like she was ready to start a new race,” John said. “I told her it was time for her to go out on your own because I can’t keep up with you anymore. She just left with the pacer. That was the turning point. It was a bittersweet moment.”

For the first time, Alexi ran without her dad beside her, but it didn’t stop her from picking up the pace and finishing in 2:11:52.

“It’s good to have someone there who knows what it’s like to push hard and keep going,” Alexi said. “And we’ve had a lot of bonding time.”

When John reflects on his daughter’s first year of running, he said he’s amazed by how much it’s changed her life for the better.

“I think she’s done a fantastic job,” John said. “Running has impacted her peripherally, too. She’s getting tremendous grades. She’s inspired her friends and family, which is really cool. She will be looking to take on a mud run next.

“And I think she’s learned a lot about herself in regards to being successful. Whether you run a 1:58 or a 2:47, finishing is the important thing, just getting up, getting out and doing it.”